Published 06 September 2013
Last year, an ancient history student from UNE spent two weeks immersing herself in the rich history of Israel, at the archaeological site of Apollonia-Arsuf. On Thursday September 12th Christine V… 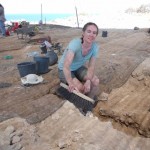 Last year, an ancient history student from UNE spent two weeks immersing herself in the rich history of Israel, at the archaeological site of Apollonia-Arsuf. On Thursday September 12th Christine Vandor will share her insights into working on this major historical excavation site at a public lecture at UNE.

Perched on a cliff overlooking the Mediterranean Sea near Tel Aviv in Israel, Apollonia-Arsuf is a place steeped in history and mystery. Since Phoenician times, the site has lured settlers and armies from near and far, including from the Persian, Greek, Roman and Byzantine Empires.  In A.D. 1101 it was captured by the Crusaders, and became the site of a major fortified stronghold.

Today the site lures armies of a different kind. Archaeologists and students of history are in the process of uncovering its rich and fascinating past, and last year Christine Vandor was amongst them.

Christine was given the opportunity of a lifetime when she was awarded the annual Caswell & Mulligan International Travel Bursary for undergraduate students of ancient history at UNE in 2012. Due to her particular interest in the Israel, the Middle East and religious traditions in antiquity, Christine chose Apollonia-Arsuf as her destination and spent two weeks working on the site of the township surrounding the Crusader fortress. It is a choice she is glad she made. “When I chose this particular excavation, I was unaware of just how unique Apollonia-Arsuf was in terms of uninterrupted settlements from Phoenician times through to the Crusader period, and the richness of archaeology it offers,” she said.

Christine, who hopes to complete her Bachelor of Arts in Ancient History with Honours next year, will be giving the lecture on her experiences on Thursday September 12th at 7:30-8:30pm. This is a fantastic opportunity for anyone with an interest in history to hear a first-hand account of what it is like to work on such a significant archaeological site.

The Bursary is funded by UNE Ancient History B.A. graduate Dr Gabrielle Caswell, a medical specialist, and establisher and owner of the local Eyra clinics, and her husband local Moree farmer Stefan Mulligan.