Published 20 September 2013
‘Global Warming, Militarism and Nonviolence: The Art of Active Resistance’ by Marty Branagan (Palgrave Macmillan, UK, 2013) is now available and was officially launched at UNE on Septem… 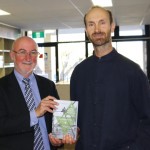 ‘Global Warming, Militarism and Nonviolence: The Art of Active Resistance’ by Marty Branagan (Palgrave Macmillan, UK, 2013) is now available and was officially launched at UNE on September 20 by UNE Vice-Chancellor, Professor Jim Barber.

In his book, Dr Branagan uses Australian and international cases to show that nonviolence is a viable alternative to militarism for national defence and regime change.

“Militarism is the elephant in the room of global warming. Of all government sectors, ‘Defence’ has the highest carbon footprint and expenditure, yet it has largely been exempt from international scrutiny and regulation,” Dr Branagan said.

“The concept of ‘Active resistance’ was initiated in Australian environmental blockades and has been adopted globally: activists erect tripod villages, bury, chain and cement themselves into the ground, and ‘lock-on’ to machinery and gates. Active resistance, ‘artistic activism’, and use of new information and communication technologies in movements such as the Arab Spring and ‘Occupy’ demonstrate that nonviolence is an effective, evolving praxis.”

Dr Branagan is a Lecturer in Peace Studies at the University of New England, Australia. He coordinates the Master of Environmental Advocacy degree and annual Nonviolence Film Festival at UNE and has a long history of artistic activism in nonviolent social movements. He exhibits art regularly, and is active in music, community radio, permaculture and coaching football.

A second launch will take place at Gleebooks in Glebe on 29 November at 6pm by Senator Lee Rhiannon.

The book is now available at the United Campus Bookshop, UNE or online at www.amazon.com/Global-Warming-Militarism-Nonviolence-Resistance/dp/1137010096