Celebrating 75 Years of Sport at UNE 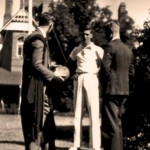 The event was held in the new Multipurpose Hall at Sport UNE, and the recent extensions were opened by Barnaby Joyce MP. MC for the evening was Mr. Peter Annis Brown, former CEO of Northern Inland Academy of Sport.

The evening featured a Q & A Panel of UNE Sporting stars including:

Kathleen Partridge
UNE Sportsperson of the Year in 1982, Kathy was a member of the Australian Women’s Hockey Squad from 1982 – 1996, notching up 65 games and representing Australia in two Olympic Games, winning a gold medal in Seoul in 1988. Kathy is currently the Assistant Coach of the Kookaburras, the Australian Men’s Hockey Team and is the first female to be appointed to a men’s national sporting program.

Shaun Creighton
Shaun is a long distance runner who represented Australia 24 times, including at the 1996 Atlanta Olympics and the 2000 Sydney Olympics. Shaun is one of UNE’s distance education success stories and studied postgraduate law whilst training around the globe. Today he practices law in Canberra and still holds the Australian record for the 3000m steeple chase.

Melissa Mitchell
A freestyle swimmer, Mel enjoyed success in the pool from a young age. Qualifying for the 2004 Athens Olympics at just 16, she retired with injury in 2007 after two world championships, wining a silver and gold medal respectively. She has now been back in the water for just under 2 years and, after narrowly missing out on selection for the London games by 0.5 of a second, has her eyes firmly set on Rio in 2016.

Emma Gillogly
A current member of the Australian Women’s Rugby 7s Squad, Emma commenced study at UNE in 2007 and was heavily involved in the UNE community. Emma represented UNE in a variety of sports at the Australian University Games during each year of her studies. She also served on the SportUNE Board and University Council. Emma is currently a teacher specialising in Personal Development, Health and Physical Education.