Published 23 August 2013
The University of New England this week held a reception for retiring Federal Member for New England, Mr. Tony Windsor, to recognise his contributions to the University during his political career.… 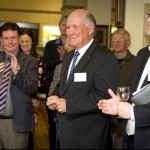 The University of New England this week held a reception for retiring Federal Member for New England, Mr. Tony Windsor, to recognise his contributions to the University during his political career.

Mr. Windsor will not contest the September election, standing aside from the seat he has represented for twelve years.

During Mr. Windsor’s term in office, UNE has been the recipient of many significant funding grants which have ensured the University’s ability to maintain its place as one of the country’s foremost higher education providers.

Chancellor of UNE, the Hon. John Watkins, attended the reception and expressed his gratitude for the continual support of Mr. Windsor. “UNE continues to be at the leading edge of education technology in Australia. This is thanks in no small part to vital funding secured with Mr. Windsor’s backing.”

UNE Vice-Chancellor, Professor Jim Barber, said that some of UNE’s major projects have gone ahead with funding secured during Mr. Windsor’s term, including over $10 million for the Tablelands Clinical School, $29 million towards the UNE Integrated Agricultural Education Project and $36 million for the Structural Adjustment Fund. He also acknowledged Mr. Windsor’s efforts in securing high-speed broadband for Armidale, which UNE believes improves people’s access to education.

“I would also like to extend my gratitude to his two closest advisors Graham Nuttall and John Clements who have been good friends to the University,” Professor Barber said.

“Mr. Windsor’s support to UNE has not only benefited UNE as a provider of quality higher education and as a major employer, but has benefited the Armidale and New England community as a whole.”