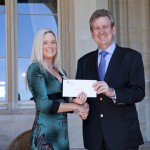 A former Masters student from the University of New England has been honoured by the New South Wales Premier with a prestigious scholarship for her research into the recognition of Indigenous perspectives in the science curriculum of Australian schools.

Nicolette Hilton was selected as the winning applicant for the Premier’s Copyright Agency Creativity and Innovation Scholarship from a field of 72 teachers, the highest number ever to apply for the highly-coveted scholarship.

The $15,000 scholarship will allow Ms Hilton to travel both internationally and within Australia to meet with some of the world’s leading educational academics into Indigenous perspectives in science curricula.

Ms Hilton’s research proposal is based upon the notion that students and scientists alike must be able to consider scientific knowledge from a variety of cultural viewpoints and ways of knowing. Indigenous history and culture has been identified as one of the cross-curriculum priorities in the Australian national curriculum, yet Ms Hilton’s preliminary research revealed that many Australian science teachers were not confident or competent in delivering science from an Indigenous perspective.

UNE Vice-Chancellor, Professor Jim Barber, offered his sincere congratulations to Ms Hilton. “It is wonderful to see Nicolette’s research being recognised by the Premier,” he said. “Her work reflects how important it is for Australian students to be aware of the history and culture of our Indigenous populations.

“The future opportunities this scholarship opens up for Nicolette’s research are very exciting, and I have no doubt she will continue to produce very important work in her field,” he said.

Ms Hilton has been a science teacher for eight years, and in this time she has worked alongside NASA in their Spaceward Bound program for students and teachers, received a Churchill Fellowship, and completed her Masters in Education through UNE.

This is not the first time Ms Hilton’s work has been recognised. She has previously received the Minister for Education’s Medal of Distinction and Best National Achievement in the Australian Government Quality Schooling Awards, BHP Billiton Science Teacher Award, and an Australian Academy of Science Teachers Award. In 2008 she received UNE’s Young Distinguished Alumni Award for her early career achievements.

Ms Hilton is to be recognised once again in September when she will be honoured as the winner of the NSW Teachers’ Guild Research Award at the Guild’s annual dinner in Sydney.