The welfare of animals, agricultural industries and rural communities has been at the heart of Dr Robert Wilson's 40-year career. It 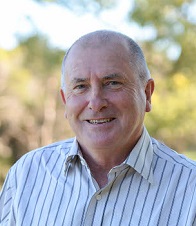 has inspired innovations to commercial production, novel research and development, and voluntary service aimed at encouraging the next generation of producers.

A widely respected animal scientist, Rob is best known for his contributions to the Australian pork industry and the advancements in welfare and environmental standards he helped pioneer. From developing Western Australia's largest integrated pork operation (Wandalup Farms) to several Pork CRC roles and leadership of a number of federal research programs, his career has traced the rising trajectory of the Australian pork industry itself.

"There were few commercial animal nutritionists when I graduated from UNE (with a Bachelor of Science and Diploma of Science in Agriculture, in the early 1970s)," says Rob, a recipient of this year's UNE Alumni Achievement Award. "The pork industry was small and dynamic, and we had researchers and farmers who could see the potential for more intensive production. We all worked together and had a common purpose; it's still like that today."

Pork was largely a sideline to dairy or grain production, but times were changing. "The industry was evolving into something more sophisticated, more of a business, and we needed to get all the aspects right - from the farming, through the supply chain to a quality product," Rob says. "Consumers were starting to see pork as something other than a celebratory product, but we had to educate them and the chefs, and pork producers had to do their job well. Nutrition, genetics, management, biosecurity and disease management all became very important, as well as R&D."

After Wandalup, Rob was invited to join the Pork CRC, first as a commercialisation manager, then responsible for improving the industry's green credentials and integrity. His research and co-operative partnerships with producers, agribusiness companies and government agencies saw him champion new industry standards for animal welfare and sustainable waste management - standards adopted nationally and internationally, not only in pork but throughout other intensive agricultural industries.

"Australia has been very proactive in terms of addressing welfare and environmental challenges," Rob says. "Thanks largely to industry R&D, and the time and goodwill of a lot of farmers, we now have appropriate welfare practices that are audited and benchmarked around the country.

"The industry also produces a lot of effluent, but we developed vast composting and recycling systems to ensure there is very little or no discharge to land, and the nutrients can be sustainably applied to plants or crops. We now have a pork industry that is not just profitable and internationally competitive but also ethical."

Importantly, Rob's adoption of technology to improve productivity, product quality and generate new markets has not been at the expense of smaller pork players. "Very early on, and throughout my career, I've been conscious of including smaller family farmers," he says. "I developed a contract growing scheme, where we encouraged progressive farmers to build their pig production facilities. This often meant that family members could stay working on the farm, because it gave them another source of guaranteed income."

Whether it has been his active role in R&D or industry politics - through the Pork CRC, Pig Research and Development Corporation or the WA Pork Producers Association (WAPPA), Rob has been instrumental in transforming the pork industry into one focussed on ethics, eating quality and efficiencies. Such contributions earned him a Membership of the General Division of the Order of Australia (AM) in 2007.

More recently, Rob became a director and chair of Westpork, WA's largest and the third largest pork producer in Australia. He is also the inaugural chair of the advisory board for the Curtin Health Innovation Research Institute at Curtin University, chair of Pork Innovation WA and a director of the Food Agility CRC.

As a mentor to young people, councillor and past president of the Royal Agricultural Society of Western Australia and inaugural chair of Agricultural Shows Australia (ASA, representing the nation's 580 agricultural societies and shows), Rob continues to invest in the future of agriculture.

"I am enthusiastic about educating people about agriculture and their food, because the divide between producers and consumers is so huge," Rob says. "There are generations of kids growing up now with no idea about wool, cotton, milk and meat, so we spend a lot of time and effort improving the educational component of agricultural shows, particularly through benchmarking and competitions. With ASA I am involved in mentoring our rural ambassadors and young judges, to encourage young people to pursue careers in agriculture. We also have to ensure our agricultural shows remain relevant to agriculture and their communities."