Frank Letters (pictured), the distinguished scholar who was New England University College's foundation lecturer in Classics and English, is reputed to have displayed some of the characteristics popularly associated with 'the absent-minded professor'. In his memoir Came to Booloominbah, Keith Leopold, one of the College's foundation students, recalls Dr Letters as 'a man of immense learning' as well as 'a most likeable person'. He was also, says Leopold, 'one of the few people I ever encountered in 47 years around universities who approximated to the traditional popular conception of the unworldly academic'. Leopold recalls that in Dr Letter's first English class at the College, he asked his students to write their names on a sheet of paper and failed to notice that there were 17 names on the list but only 15 students present. "He asked students to raise their hands when their names were called," Leopold writes, "and seemed quite surprised when neither Mr A. Hitler nor Mr J.A. Lyons raised a hand."

Another memorable character was Jack Makeham from Agricultural Economics. "Jack was one of those larger-than-life characters," recalled one of his students. "You could encounter him in the corridors of Agricultural Economics at any hour, usually dressed in something like a poncho, and closely followed by his dog Mungus. 'Good morning, Comrade,' he'd say. Jack and Mungus worked as a team; they were inseparable."

Edgar Booth, the first Warden of the University College, was also often attended by an animal companion – a large cat called Pamela. Pamela would accompany Booth to breakfast, and be carried around the room as he chatted to one student after another. In the Physics lecture room, Pamela served as Booth's assistant in his demonstrations of static electricity.

Student pranks were a common diversion in the residential colleges. Furniture was continually being 're-allocated', under cover of darkness, from one college to another. Carried out on a tit-for-tat basis, this usually resulted in a fairly even redistribution. One night, however, the men from St Albert's College liberated more items from Robb College than they could fit into the destined common room, and they were discovered by the Yeoman Bedell, sitting on a mountain of furniture.

A favourite practical joke was to remove everything from a student's room and reassemble it somewhere else. One evening, the contents of a St Albert's room were reassembled in the middle of the Bellevue Oval. When the perplexed owner finally discovered it, the bed was already occupied by another student who had collapsed into it on his way home from a night out in Armidale.

Another night, a St Albert's man on his way back to college after a night on the town walked through the camp site of a visiting circus. A baby elephant attracted his attention, and he offered the animal a handful of grass. The elephant accepted the gift and asked for more – which was forthcoming. In a late-night mood of universal benevolence, the student liberated the beast by untying the rope attached to its leg. Proceeding on his way, he was dismayed to discover that the baby elephant had taken a liking to his benefactor and was following him along the path. When he quickened his pace, the elephant did so too. The residents of St Albert's were amused to see their fellow student running into the college grounds hotly pursued by an elephant.

Armidale had some problems with its electricity supply during World War II. One night, a student noticed that when he turned on the hot water in his College shower all the lights of Armidale dimmed. In the true spirit of science, all of his fellow students had to try the experiment in turn.

A celebrated case during World War II was that of the 'speechless candidate'. A female figure, enveloped in hat and scarf, was escorted to Booloominbah by a woman who said that her friend was there to sit the exam for entrance to Sydney University's medical degree program. She explained that the candidate was suffering from severe laryngitis and was unable to speak, but was nevertheless well enough to do the exam. The enigmatic female figure aroused the suspicions of the Warden, Edgar Booth, who invited the pair into his office. Shortly after being seated, Booth leapt from his chair with the cry, "It's a bee! It's a bee!", and ran around the room flapping his arms at the imaginary insect. In the course of these antics, he knocked the hat – and a wig – from the head of the 'candidate', revealing the man beneath them. The conspirators intended that the 'speechless candidate' would do the exam under the name of his aspiring (but under-prepared) companion. The case was subsequently brought to court and justice dispensed.

Onslaught of the elements 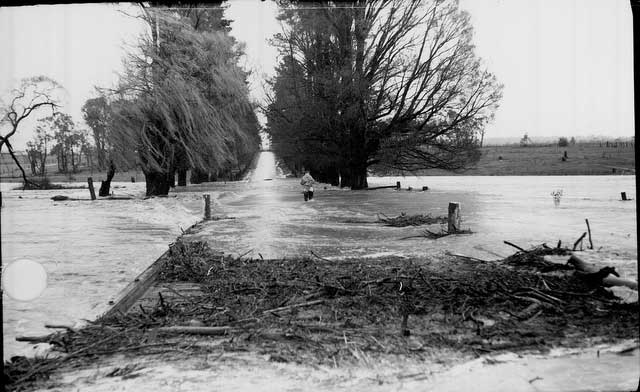 Before the construction of Madgwick Drive in the 1960s, Elm Avenue was the only road from Armidale onto the University campus. This meant that flooding of the creeklands at the bottom of Elm Avenue (pictured)  could cut all road access to the campus. So on days of potentially flooding rain, staff members were sent home to avoid their being stranded at work.

At 4 o'clock one stormy winter's afternoon the entire campus was blacked out after a bolt of lightning struck the local electricity sub-station. The entire campus was plunged into darkness, including a hall where students were just two-thirds of the way through an examination. It was quickly decided that they would be assessed on only two-thirds of their papers, which were then quickly collected. In the process one paper was mislaid, and there was a frantic search for it in the dark before it was eventually found inside another paper.

A certain lecturer had the habit of controlling a ceiling-mounted projector by reaching up to it with his pointer stick rather than by using the switches on the lectern. This resulted in the frequent blowing of the projector's bulbs, which the electricians had to replace – with difficulty – by climbing up to the ceiling on scaffolding. Finally, in frustration, they sought the help of their carpenter colleagues, who accompanied them to the lecture room and cut eighteen inches off the pointer stick. The lecturer was surprised to find that his stick would no longer reach the projector.