Cadmium (Cd) and Arsenic (As) in Co-contaminated Soils: Risks and Options for Management - Sajanee Gunadasa

Contamination of farm soils with toxic metals has become a serious problem across the world. Overuse of chemical fertilisers and other agrochemicals are to be blamed for Cd and As contamination in Sri Lanka, particularly in the farming areas. The soil contamination is the most probable cause of chronic kidney disease in rural areas. My PhD study will investigate the fate and behaviour of Cd and As in co-contaminated systems, aim to understand factors influencing mobility and bioavailability in the Dry Zone soils of Sri Lanka and assess options for effective treatment of the As and Cd co-contaminated soils. This presentation will give you a brief overview of my PhD study and how I will achieve the aims.

Root carbon inputs into soil from a C4 root system

In the past decade there has been considerable research interest in soil carbon, particularly on the larger scale of soil types and land uses. Root and root exudates have received little attention in regards to their contribution to the soil organic carbon pool. This presentation will give a brief overview of the contribution of root derived carbon inputs into the soil organic carbon pool, as the root system grows across time.

Soil carbon fractions indicate the resilience or otherwise of carbon stored in soils and its relative rate of decomposition and cycling. Where a change of vegetation cover from C3 to C4 species takes place, δ13C abundance in SOC fractions and their distribution in soil profiles can be used to determine the quantity, rate and distribution of “new” carbon added to the soil system. In this work, we examined the isotopic signature (δ13C) of two soil fractions, their quantity, vertical distribution and turnover rates under Vetiver (C4) compared with native (C3) grasses at a research site in Gunnedah Resource Centre, NSW. Vetiver is a fast growing tropical grass used extensively in Africa and Asia for soil conservation works and it has been proposed that this grass has considerable potential for efficient storage of additional soil carbon. The δ13C distribution in the soil profile was used to explore the nature and proportion of soil carbon contributed by Vetiver.

Carbon accumulation in surface soils is well documented but very little is known about the mechanisms and processes that result in carbon accumulation and long-term storage in the deeper soil profile. We investigated the quantity and distribution of DOC through the profile under three different land-uses (woodland, pasture and cropland) in northern NSW, Australia. This research provides new insights into the mechanisms and importance of DOC to the soil carbon cycle in Australian soils. Most of the world’s grain production is derived from crops that are either naturally self-pollinating (wheat, rice, barley, and most grain legumes), or are deliberately self-pollinated during the breeding process (F1 hybrid crops such as maize, canola, sorghum). In traditional breeding methods, selfing is exploited to accurately select superior inbred lines. Relatively few lines survive the selection process and effective population size tends to be lower than in animal breeding. Cycle time (the interval between crossing events) tends to be longer, and the rates of recombination are lower, than in animal breeding. We propose a unified method of plant and animal breeding where lines are selected in early generations of selfing, breeding value is based on all records in the pedigree, and optimal contribution selection is used to promote long-term genetic progress. Cycle time is reduced, and effective population size increases. Models of the method, developed with UNE colleagues, suggest that the average rate of increase in economic index, including yield, disease resistance and grain quality, is double that of traditional methods.

Bronze Age smelting sites in central Thailand have been identified as playing a major role in regional cultural development. However, the extent of contamination with heavy metals such as copper at these sites, and any resultant risk to humans or the environment, is completely unknown. The potential for the use of portable x-ray fluorescence technology to identify these sites and contamination hotspots was assessed and found to be an accurate and efficient alternative to the traditional wet chemistry aqua regia technique for copper when appropriate analysis settings were used. Current mobility of soil copper was also assessed, and while this was found to be relatively immobile, values were still high in absolute terms. Preliminary sampling also indicated transfer into plant material. The economy of Bangladesh is mainly governed by agriculture. Organic Farming is gradually increasing in Bangladesh in particular through efforts of NGO’s and private entrepreneurs. This presentation will give a brief idea about the present status of organic farming in Bangladesh with respect to production, trade, research and development as well as governmental interruption to promote organic farming.

What is all that auxin doing in developing grains? - Dr Heather Nonhebel The general perception of auxin is that it is a growth hormone primarily involved in vegetative development. However, the highest IAA levels are found in developing fruits/grains. I will present evidence for grain-specific IAA biosynthesis genes and transcriptional regulators that are exclusively expressed during endosperm cellularisation in developing cereal grains. In addition, genes for storage proteins, starch biosynthesis enzymes and a number of signalling proteins appear to be regulated by auxin in conjunction with another well-studied transcriptional regulator. I conclude that there is strong evidence for a role for auxin in the sink strength of developing grains and the initiation of endosperm starch production. Soil health is an essential requirement of a sustainable, functioning agroecosystem. Tracking soil health to determine sustainability at the local level largely falls to farmers, even though they often lack access to critical information. We examine farmers’ participation in gathering soil information at the farm and paddock scale over the last two decades in Australia and the United States, by reviewing national-level reporting of farmer use of soil testing. The level of participation in soil testing has remained stable in the last two decades, with only 25% and 30% of landholders, respectively, participating nationally, in either country. The review revealed national-level reporting has a number of limitations in understanding farmers’ use of soil information and, in particular, fails to indicate the frequency and intensity of soil testing as well as farmer motivation to test soil or what they did with the soil information. The main use of soil testing is often stated as “determining fertilizer requirements”, yet data show soil testing is used less commonly than is customary practice. The rhetoric is heavy on the use of soil testing as a decision tool, and that it guides best practices. However, given that only a quarter of farmers are soil testing, and doing so infrequently and in low densities, the level of information on soil health is poor. Professor James Whelan is Co-Director of AgriBio: The Centre for AgriBioscience, La Trobe University, andDirector of the La Trobe Focus Area ofSecuring Food, Water and the Environment; Winner of several prestigious awards (OECD Fellowship, Werner-Gren Fellowship, the Peter Goldacre Medal by the Australian Society of Plant Scientists, Alexander von Humboldt Fellowship); Recognised by the American Society of Plant Biology as one of the few Australian Plant Scientists to be a most highly cited and influential scientist (h-index 62 and 11,270 citations); A key player in establishing the Australian Research Council Centre of Excellence in Plant Energy Biology. 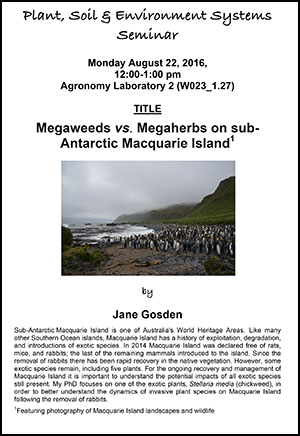 Urban agriculture is estimated to make up nearly 6% of the world’s crop land and is practiced worldwide by as many as 800 million people. Yet the sector is mostly informal and has been the subject of very limited academic research, meaning that we know very little about it. Robert is investigating the economics and ecology of these systems, using market, private and community gardens in Sydney and the Illawarra as case studies. Preliminary results imply that, whilst most of the gardeners involved carry out the activity as a hobby, rather than professionally, and are far more interested in quality of produce over quantity some still produce yields of fruit and vegetables that, on a per hectare rate, exceed those of most commercial farms. However it appears that these gardens are labour intensive, with only the most efficient being economically viable and even then only marginally so.

Soil biology and particularly microbiology has come a long way since Leonardo De Vinci said "we know more about the celestial bodies than we did the soil under our feet." The days of culturing a small proportion of the soil microbes have been superseded by DNA and high throughput techniques, but that should not mean that classical methods are forgotten. How else will we understand what the new organisms, whose DNA we find, do in our systems?

In this seminar I reviewed how things have changed over my 25 years as a researcher, how the Archaea have arisen, how pesticide legislation is altering nematode populations and how plant border cells are more akin to our own immune system than many would think. Samieh Eskandari and Katherine Polain joined me to inform the audience about the very latest research on mycorrhizal importance to cotton in sodic soils and how we can use 18O on phosphorus to determine microbial activity. I’m not sure what the future will look like, but large amounts of data will be involved and our power to interrogate it will also grow.

A/Prof Paul Kristiansen has been carrying out projects and working with Vietnamese colleagues since 2009. Having completed eight projects with five more in progress, he has wide experience in the land use systems and socio-economics of Vietnam. In this talk, Paul described the current situation facing agriculture in Vietnam, highlighting some of the key opportunities and challenges for various parts of the country. Current links between UNE and Vietnam are strong across several disciplines, especially in agriculture, environmental management and agribusiness.

Internationally renowned for his work on signalling mechanisms of biotic and abiotic stresses in plants, Professor Hirt’s current research is focused on molecular mechanisms induced by microbial associations that enable plants to adapt to extreme environmental conditions, and to promote use of the appropriate rhizosphere partners for sustainable crop food production. His research has also demonstrated that Salmonella enterica, a major cause of food poisoning in humans, escapes the plant immune system and accomplishes colonisation of plant tissues. Author of 165+ publications with 20,954 citations, and an h-index 68, Dr Hirt has also served in administration as the Head of the Department of Plant Molecular Biology, University of Vienna (2006-2007), Director of URGV Plant Genomics, Evry, France (2008-2013), Director of Center of Desert Agriculture, KAUST, Jeddah, KSA (2014- 2015) and is currently Head of Plant-Microbe Group at the Center of Desert Agriculture at KAUST. Additional information can be found online.