Life in Earth: perspectives on the biological engine of the soil - Dr Karl Ritz 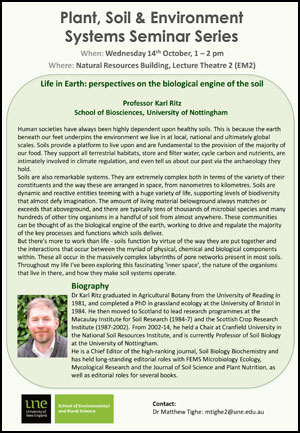 Human societies have always been highly dependent upon healthy soils. This is because the earth beneath our feet underpins the environment we live in at local, national and ultimately global scales. Soils provide a platform to live upon and are fundamental to the provision of the majority of our food. They support all terrestrial habitats, store and filter water, cycle carbon and nutrients, are intimately involved in climate regulation, and even tell us about our past via the archaeology they hold.

Soils are also remarkable systems. They are extremely complex both in terms of the variety of their constituents and the way these are arranged in space, from nanometres to kilometres. Soils are dynamic and reactive entities teeming with a huge variety of life, supporting levels of biodiversity that almost defy imagination. The amount of living material below ground always matches or exceeds that aboveground, and there are typically tens of thousands of microbial species and many hundreds of other tiny organisms in a handful of soil from almost anywhere. These communities can be thought of as the biological engine of the earth, working to drive and regulate the majority of the key processes and functions which soils deliver.

But there's more to work than life - soils function by virtue of the way they are put together and the interactions that occur between the myriad of physical, chemical and biological components within. These all occur in the massively complex labyrinths of pore networks present in most soils. Throughout my life I've been exploring this fascinating 'inner space', the nature of the organisms that live in there, and how they make soil systems operate.

He is a Chief Editor of the high-ranking journal, Soil Biology Biochemistry and has held long-standing editorial roles with FEMS Microbiology Ecology, Mycological Research and the Journal of Soil Science and Plant Nutrition, as well as editorial roles for several books.

We investigated the stability of whole profile soil organic carbon (SOC) based upon three mid-infrared predicted fractions – particulate organic carbon (POC), humus organic carbon (HOC) and resistant organic carbon (ROC) – at 100 sites across Eastern Australia. Our aim was to identify the controls on SOC stability down the whole soil profile, in particular relating to climate, site and human influences. To do this we used three data-mining algorithms (randomForests, gradient boosting machines and multiplicative adaptive regression splines) to identify and assess the controls on the relative proportions of the three fractions down the soil profile. Depth was the key control on all three fractions, with the proportion of POC decreasing, and the proportion of HOC carbon increasing with increasing depth. SOC was strongly linked with POC, suggesting that the soils in the region are input driven. HOC and ROC were controlled additionally by climate and soil physico-chemical properties, with SOC being less important to these fractions. Human influences (land-use and management) were not important to the fractions, implying that the controls humans can exert on SOC stability in these environments may be limited.

Can certain triticale cultivars be used to outcompete weeds in crop? - Husam Khalaf

Root system architecture is an important trait of cereals that influences nutrient acquisition from the soil. The ability of cereal species to recover nutrients from nutrient enriched patches at depth may vary genetically. Quantifying any existing variation may allow growers to select wheats lines better able to exploit the nutrient band at depth and may also help to decide fertiliser placement either near the surface or deeper in soil. Ten wheat and 5 barley varieties that are commonly grown in the northern grain region were selected and screened for both root proliferation response in a phosphorus band at depth and recovery of phosphorus from germination to maturity. Considerable variation exists in the capacity of the wheat and barley varieties from a nutrient enriched band.

All complex, multicellular organisms face the challenge of developing and maintaining a safe and efficient system for long distance transport of materials. In vascular plants, water absorbed by roots is transported up the plant in the dead remains of xylem cells. Plants are capable of rapidly transporting water to heights in excess of 100 m, and can extract water from dry soils and saline substrates. To achieve this, plants have evolved a transport system that relies on water sustaining a tensile force, such that the xylem sap is at negative absolute pressures. This mechanism is made possible by the intricate plumbing system that constitutes the xylem tissue of plants. However, this transport mechanism comes with its own set of problems. Most notably, water under tension is prone to cavitation, which results in the formation of a gas bubble (embolism). Embolism reduces the capacity of the xylem tissue to deliver water to the canopy, eventually causing dieback and whole plant mortality. Xylem embolism is exacerbated by environmental stresses and is now considered one of the leading causes of plant mortality resulting from drought stress. Progress in our understanding of plant water transport has been hampered by the inherent difficulty in observing and experimentally manipulating a transport system containing a metastable liquid. Non-invasive imaging techniques such as micro computed tomography (microCT) offer the potential to make direct observations on intact plants at high resolution and in real time. We utilised synchrotron based x-ray microCT to examine xylem function during drought stress in a range of woody plant species. These observations provided unprecedented spatial and temporal resolution of (a) the patterns of embolism spread in the xylem network during dehydration, and (b) refilling of embolised xylem conduits during recovery from drought. These results were compared with widely used techniques that require destructive sampling.

Brendan Choat obtained his BSc (Hons) in 1997 (JCU) and his PhD in 2003 (JCU). From 2003-2005 he worked as a Post Doctoral Fellow at Harvard University in the Department of Organismic and Evolutionary Biology. He held a second Post Doctoral Fellowship in the Department of Viticulture and Enology at the University of California, Davis from 2005-2008. In 2008 he returned to Australia to take up a Research Fellowship at ANU before moving to a Senior Research Lectureship at the Hawkesbury Institute for the Environment (UWS). He is an editor for the PrometheusWiki Project and on the editorial review board of Tree Physiology. In 2010 he was awarded an Alexander von Humboldt Fellowship for Experienced Researchers. In 2013, Dr Choat was awarded an ARC Future Fellowship for his work in mapping drought responses in plants.

Professor Peter Gregg joined UNE as a lecturer in agricultural ecology and insect pest management in 1980. His research has focused on the ecology of insect pests of cotton, and the development of alternatives to insecticides for managing these pests. In 2005 he was seconded to the position of Chief Scientist of the Cotton Catchment Communities CRC, and following the winding up of the CRC, he has pursued an active research program as an Adjunct Professor at UNE. Dr. Alice Del Socorro joined UNE as a Research Fellow in 1995, and has worked on many research projects in collaboration with Peter and other colleagues. In 2009, the group led by Peter and Alice registered an attract-and-kill product, Magnet®, which is the first commercial product of this type based on plant volatiles in the world, and one of very few novel pest management products ever commercialised in Australia. This represented the culmination of 13 years of research through various Cotton CRCs, with the assistance of commercial partners AgBiTech Pty. Ltd. The seminar will be delivered in two parts, the first describing the science behind Magnet® and the second describing the processes of patent protection, registration, commercial development and the search for practical applications for the product.

Following a successful academic career of 20 years at the Western University, London ON, Canada, Professor Priti Krishna recently joined ERS at UNE as Associate Professor of Plant Biology. With a Master's in Microbiology, PhD in Biochemistry, and postdoctoral training and independent research career in Plant Molecular Biology, Priti has applied her diverse research background to developing pioneering projects and implemented an integrative and collaborative approach to her research, together with rapid adoption of relevant new technologies and approaches as required.  Her research is focused on brassinosteroid-mediated stress tolerance and the plant Hsp90 chaperone complex. Both topics are inherently linked with plant stress responses and also span molecular mechanisms underlying other desired traits such as plant architecture, yield, root development etc. Most importantly, brassinosteroids confer broad-spectrum stress tolerance in plants, which is crucial for maintaining crop productivity and quality in the face of global environmental challenges. Keeping in mind ERS's world-class research in the area of root, soil and environmental systems, she now envisions focusing on hormone controlled root traits, which will enhance soil exploration and water and nutrient acquisition.

Isaac Macharia is a PhD candidate in Agronomy and Soil Science, School of Environmental and Rural Science.

Graeme Blair is Adjunct Professor of Plant Nutrition at the School of Environmental and Rural Science, university of New England.

The nature of alkaline, cracking clays and their importance in northern farming systems presents many interesting research questions regarding the sustainability of their long-term use for agriculture. This presentation will reflect on the soil fertility of Vertosols, the nature of their nutrient reserves and the ability of plants to access them and what that may mean for farming systems in the future. Topics addressed will range from P reserves and S dynamics, through K availability and interactions with sodicity and culminate with current research into the nature and plasticity of root responses to nutrient application strategies, in situ, in Vertosols by cereals using 3D tomography. Ultimately it will argue that far more research needs to be directed towards legumes if the constraints of fertility will result in prolonged fecundity in northern farming systems.