Oriental Theileriosis is a tick borne disease of cattle and buffaloes caused by the protozoan parasite, Theileria which affects the red blood cells. The disease is usually found in tropical and subtropical regions where suitable tick vectors occur. Out of the different genotypes, Ikeda and Chitose are consistently found to be associated with severe disease. Research and investigation of cases involving infection with T. orientalis in Australia has been ongoing. Despite various studies in the genotype identification of the parasite, information on the seasonal abundance of vectors is scarce. In addition to bush ticks (Haemaphysalislongicornis), the involvement of other reported tick species, biting flies and lice in the transmission of the parasite needs to be investigated. Moreover, since the Northern Tableland is less preferable for ticks as compared to coastal regions because of long severe winter, the full appreciation of vectors in the transmission of the parasite needs to be addressed for proper control. Therefore, our project is undertaken to better understand the potential vectors along with the genotype profile and their seasonal abundance in the study areas of the Northern Tablelands of NSW using qPCR. Furthermore, the study will look into the salivary glands of ticks to determine their infection status with the parasite. 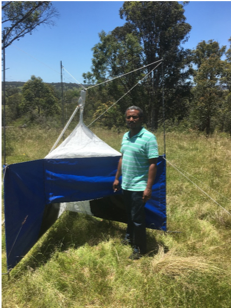