'God’s Powerhouse: piety, faith and salvation in temples and churches of the Roman empire.’

Before the fourth century, buildings had little or no theological or spiritual significance in Christianity. After 313 they developed dramatically into evangelists of stone and brick: converting unbelievers, framing the encounter between Christ and community members, and inflaming faith. This change not only reveals much about evolving Christianity, but raises new questions about the role of religious buildings elsewhere in the Graeco-Roman world, and sheds new light on some of Christianity’s major competitors. This lecture will explore the power of buildings to shape piety in ancient religious thinking, and reflect on the ongoing role of interdisciplinarity in shaping research. 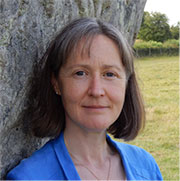 Teresa Morgan specializes in the history of later Greek and Roman culture and mentality, New Testament studies, and early Church history. She has written widely on ancient education, ethics, religious mentality, and church historiography. She is currently working on a trilogy of studies of the origins and early evolution of Christian faith: Roman Faith and Christian Faith (OUP 2015), Trust in Theology and The Invention of Faith.

'Encyclopaedias of virtue? Collections of sayings and stories about wise men in Greek', in Encyclopaedism from Antiquity to the Renaissance, J. Koenig and G. Woolf (eds.), (Cambridge 2013).

Literate Education in the Hellenistic and Roman Worlds, (CUP 1998).